The boys are back!

Last August Christian Dumais (CD) and Derrek Carriveau (DC) performed their two-man comedy show CD/DC to a sold out audience and it ended up becoming the American stand-up comedy event of the summer! Due to popular demand, Dumais and Carriveau are back with the long awaited sequel: CD/DC II!

CD/DC II is the continuation of the comedy Dumais and Carriveau – two of Wrocław’s brightest and funniest comedians – have been painstakingly working on over the last year, with lots of old favorites and plenty of new material.

The evening will be hosted by the one and only Lou Cash, Poland’s answer to Chuck Norris. With his angelic voice and charming demeanor, Cash will keep the audience mesmerized and the show moving.

Writer and in-demand voice actor Derrek Carriveau is going to flick the switch on the evening with his bourbon voice and beery wit. Carriveau aims his boozy humor at everyday life that is both acerbic and wonderfully honest. Be ready to be thunderstruck.

And then Christian Dumais – writer and creator of Twitter’s @DrunkHulk – takes the stage with his bizarre humor and proves why TIME named him “one of [their] favorite funnymen.” Thanks to his nearly 200,000 followers, Drunk Hulk is the fourth most popular Twitter feed in Poland. Come see why comedians like Russell Brand and writers like Neil Gaiman love Drunk Hulk.

CD/DC II promises to be bigger, brighter and, of course, funnier. If you miss CD/DC II, people will make fun of you. And why would you do that to yourself? You deserve to be respected. It’s 2014. This is your year. This is the year where everything finally changes for you. But that won’t happen unless you come to CD/DC II. 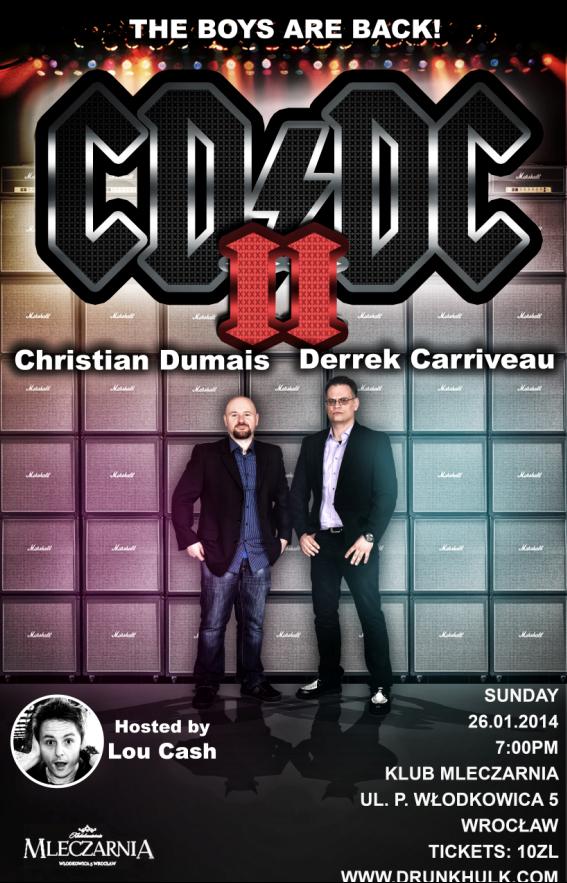