Every so often (weekly at the moment), I’ll be writing a commentary about a story from EMPTY ROOMS LONELY COUNTRIES. I’ll tackle the stories in the order they appear in the book. Given the nature of this exercise, I cannot guarantee that I won’t spoil specific details from the story. So you may want to return to the commentaries here when you’ve finished reading the book. If I don’t address an aspect of the story you were interested in, by all means leave a question at the end of this post and I’ll do my best to answer it. 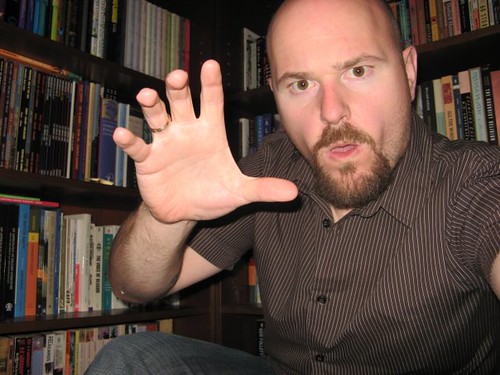 I’m always surprised when I read this story, because this is one of the few stories that continues to hold up for me and I don’t feel the need to rewrite anything. It’s one of my most successful stories on a personal level, as the message of the story is clear and I think I managed to capture what I was going through back in 1997 fairly well.

My only regret with the story is the metafictional framing device, which is something I return to in the book in another piece. While I think the device works fine with “Little Conundrums”, I’m not sure if it’s something that needed to be repeated later. Despite that, I do like the idea of these imagined conversations, the ones we have in our heads where we always say the right thing or have the perfect witty comeback, and how they can be achieved so effectively within the confines of storytelling.

Anyway, I had pieces of this story written for years in my notes, but I didn’t finish writing it as you see it today until 2003 – a few months before I left America to live in Poland. While I don’t see Jules as a missed romantic opportunity, I do see meeting her as a defining moment in my life, one that happened unexpectedly and one I couldn’t fully appreciate until years later. And since I was getting rid of almost everything I owned to make this giant leap across the ocean, I thought it was time to pack away this particular memory into a finished story. In the process of writing it, I realized what I was doing was writing a thank you letter to Jules; probably because without her brief appearance in my life, I might not have had the courage to leave everything I knew.

I don’t remember what Jules looked like. When I think of her, she’s more of this mischievous force of nature. When I think about those times in London, all I can recall in detail was the way I never stopped laughing. She was absolutely hilarious. And while I don’t remember the specific facts surrounding the story where she and her friends stole a taxi, I do remember thinking it was one of the funniest stories I had ever heard.

A lot of my memory problems (and thank goodness for my notes!) with this trip to London has to do with the fact that I pretty much drank constantly over the course of six days. I can remember standing at a pay phone in Victoria Station at around noon, talking to my parents and drinking from a half bottle of tequila. I did this because I thought it was part of being a writer, as most of the writers I had admired at the time (and still do, to be honest) tended to drink excessively.

As stated in the story, the main point of being in London during that time was to finish my first novel. I had it in my head that I needed to do the Henry Miller thing and write abroad, but more importantly, because I was writing biographical fiction, I was still waiting to experience the book’s ending. And because the book was about a girl, and because the said girl was in Oxford, I was confident that if I visited her one last time, the ending would finally appear.

And to my surprise, it did. I returned to America with a finished book. The book was A Metaphor of October, and the story was as pretentious and awkward as the title suggests, which is why it’s been locked away in a very cold and dark place for over a decade now.

Random: The song that I heard constantly throughout this trip in London was “Karma Police” by Radiohead. And the album I had with me at all times was Bob Dylan’s Time Out of Mind.

I realize now that it’s strange that I made this the second story in the book, but it works chronologically, as “The Illusion of Swing” picks up a few months after the events in this story. And after the in-your-face nature of “Cowboys and Indians”, I think it was important to show a different kind of my writing for those who might have had initial misgivings about picking ERLC up in the first place.