Whenever any asks me who my favorite comic book character is, without hesitation I always say Jim Gordon. If I were ever in a position to write comic books and I was offered a dream book, it would be be to write a monthly Jim Gordon comic. The concept of a good cop working in a city of madmen is too good to pass up. A few years ago when they had retired him, I thought it presented a wonderful opportunity to see Gordon working as a private detective, and I imagined how a monthly Gordon book would be like with that premise. Whether he’s the police commissioner or not, Gordon is a phenomenal character to play with. When they make a movie or cartoon of Batman, my first concern is always how they handle Gordon (that said, Gary Oldman hit it out of the park with the character).

Anyway, one of my favorite issues that explored the Gordon-Batman dynamic was Legends of the Dark Knight #125, which came in near the tail end of the major No Man’s Land storyline. Writer Greg Rucka has always had an extraordinary understanding of the police aspects of the Batman universe (see Gotham Central), and his take on Gordon is pitch perfect.

In No Man’s Land, Gotham City has been destroyed because of an earthquake. After a deadline, the U.S. government decides to seal off the city and have the National Guard securing all the ways into Gotham. Once isolated, the city is immediately carved up into different territories, secured by all the crazies you come to expect in the Batman universe. Gordon and a group of police officers decide to remain in Gotham in order to keep the peace and help establish order in the event the city is reopened. In the first 100 days, Batman is no where to be seen.

When Batman does return, Gordon wants nothing to do with him.  Legends of the Dark Knight #125 is the issue where Batman and Gordon are finally reunited and they put everything out in the open. The majority of the issue is a long conversation between these two men, and thanks to Rucka’s dialogue and the amazing Rick Burchett’s art (and I’d be an idiot if I didn’t point out James Hodgkins inks and Klaus Janson’s colors), it reads with the same excitement and intensity as any fight scene you’ll see in comic books. This has been a conversation a long time coming, not so much in context with the No Man’s Land storyline, but in relation to Gordon and Batman’s extended history. Rucka’s writing is deliberate, like it’s checking off a long list of issues these men would naturally address sooner or later, such as the ridiculousness and arrogance of Batman always disappearing in the middle of their conversations: 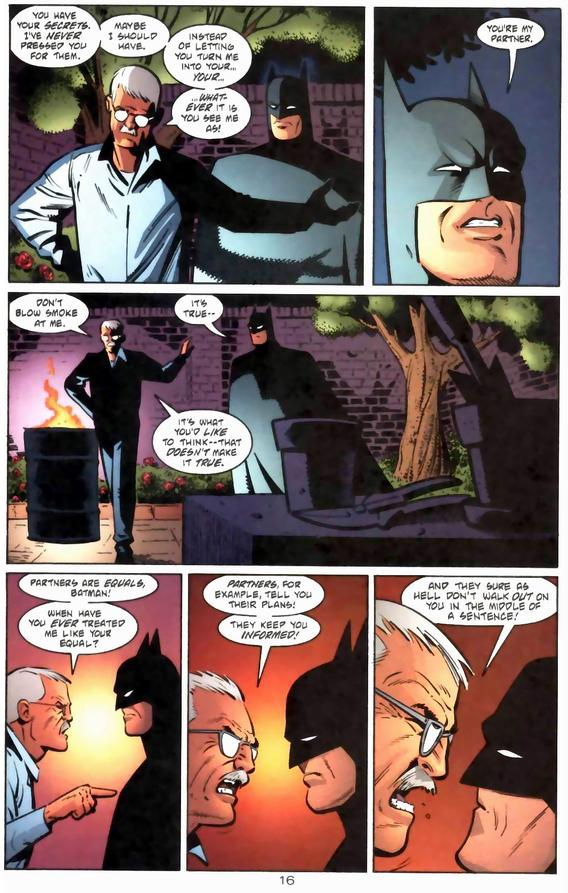 The conversation also addresses how police departments in other cities views Gordon’s working with a vigilante, Batman’s trust issues and the probability that Gordon has known who Batman was all along. It’s a no-bullshit kind of conversation that helps to reinforce why I love Jim Gordon so much.

Man, a Jim Gordon monthly comic book is what the world needs.