Wolverine is one of Marvel’s most popular characters, but once you get past the cool visuals and horrifyingly convoluted back story, what you have left is one of the most ridiculous superheroes ever created.

The character is like a television show that had an awkward start, built up a lot of momentum to become insanely popular, and then in an effort to capitalize on the show kept adding and adding to its mythology without ever once considering how to wrap it up when the show made it to the finish line (this is why I’m a firm believer in television shows having an end date by the time the first season finishes).

The smartest things to happen to the character in the last decade were to publish Origins (with sharp writing by Paul Jenkins and some lovely art by Andy Kubert and Richard Isanove), which finally established a proper starting point for James Howlett, and to have Wolverine recover his lost memories in House of M (written by Brian Michael Bendis and art by Olivier Coipel; an event that readers seem to appreciate more with distance), and finally find strength in the character’s history rather than his mystery (a gimmick that was past the point of absurdity).

If I were to add a third item to the aforementioned list, I’d probably add the decision to have Jason Aaron write Wolverine: Weapon X. 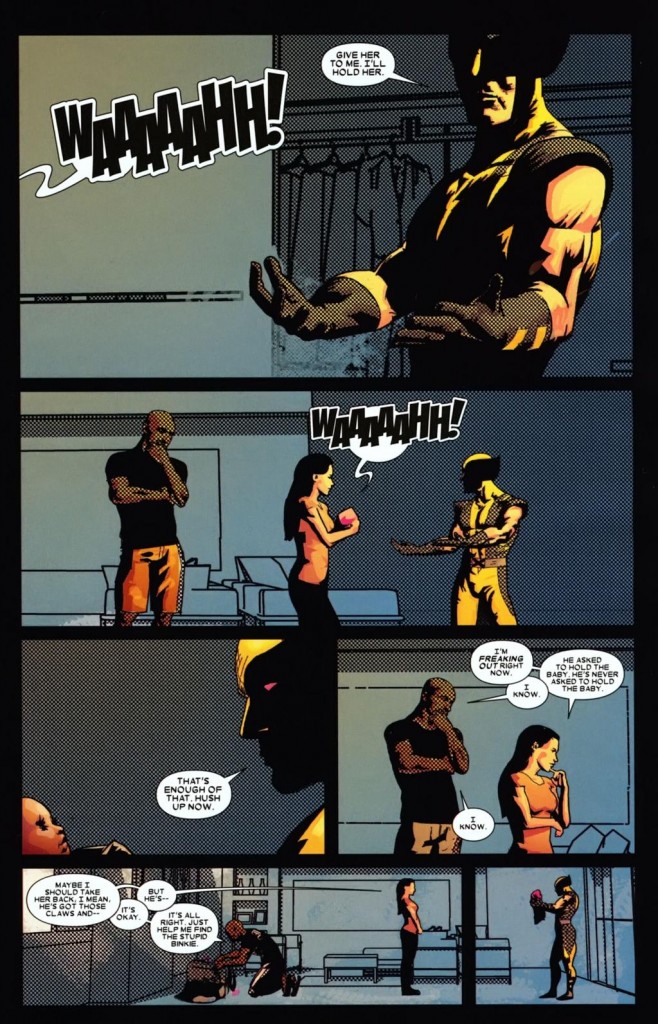 Here are some things to avoid when writing Wolverine:

– Don’t place him in the center of every major historical event in the 20th century (the world is an awfully big place).

– Don’t feel it necessary to build a conspiracy on top of the conspiracy, especially when you haven’t fully established the previous conspiracy.

– Don’t have Wolverine make silly mistakes, especially when you have him say he’s the best at what he does on the page before.

– Either Wolverine is a killer or he isn’t, but it makes no sense to have him kill a hundred people to get to the boss and then wound him before walking away (I’m thinking specifically of the first encounter with Romulus – the current conspiracy that put together all the other conspiracies – that had been built up for years; Wolverine isn’t the brightest guy in the room, but he’s not stupid).

– Don’t create a female character just so you can kill her off and add to Wolverine’s list of regrets.

So far, Aaron has avoided all of the above traps, though the last item is uncertain. That said, Aaron’s been so smart with the book, I’m confident that there’s a dodge coming with Logan’s current love interest.

Aaron’s success with Wolverine rests on his ability to understand the ridiculousness of the character and then to actually mine drama out of it. One of the ways he managed this was to push Wolverine into varying genres within his own book. The first storyline in Wolverine: Weapon X worked as an espionage thriller, the second storyline was a horror story, and in issue #10, Aaron really did the impossible by writing Wolverine in a romance. It’s an interesting trick, because by putting Logan in multiple genres, the strength of the story has to come from the character.

The page chosen for this week is page 12 from issue #10, the art being by C.P. Smith. This issue has L0gan coming to terms with the fact that he’s falling in love again. The device of Logan receiving the necessary information he needs from a long line of female colleagues isn’t the strongest, but it’s a nice way to show off Logan’s sensitivity and stubbornness.  The scene that worked best for me is when he takes the baby from Jessica Jones and Luke Cage and their reaction to this gesture. The first thing that struck me about the scene was how much I love Jones, and also how rarely we get to see her and Cage written together by other writers outside of Bendis.

Another thing about this page is Aaron’s decision to have Wolverine in costume when he takes the baby, which is visually ridiculous and highlights a lot of the awkwardness of a world with superheroes; however, since we have Logan coming to terms with his inability to open up, it makes sense to have a tender moment like this happen with the mask still on. Or maybe I’m looking at this page too hard.

I’ve written a lot more about Wolverine than I expected to, which I feel is a testament to the power of the character.

Thanks for subscribing! Please check your email for further instructions.