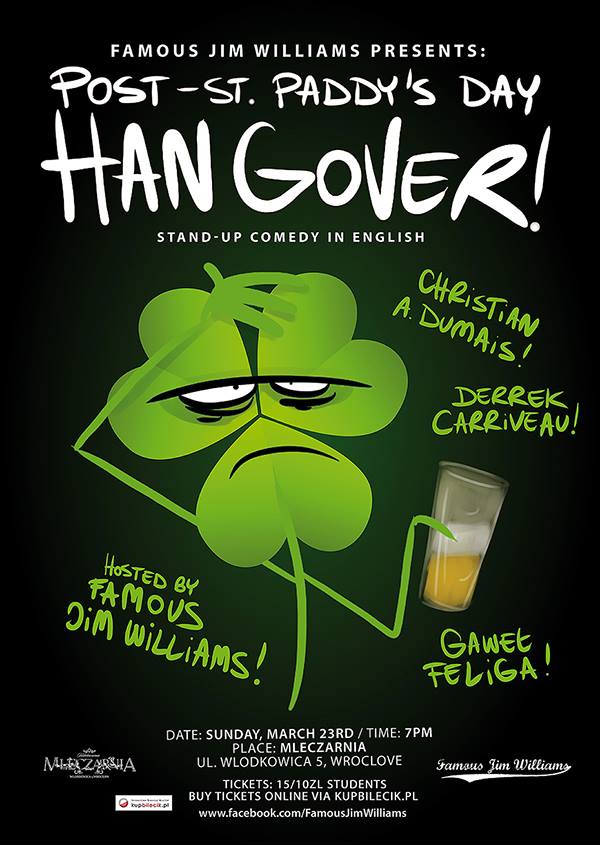 Officially, Monday the 17th is St. Patrick’s Day. If you’re like us, you’re going to enjoy a drink or twelve to honor Irish culture and tradition. This may make the rest of the week difficult to get through, but fear not. Famous Jim Williams and his crew of foreign funnymen have just the cure.

Sunday, March 23rd in Mleczarnia Famous Jim Williams presents the POST-St. Paddy’s Day Hangover! Better than water, aspirin, or 2KC, this is the show to get you back on your feet and feeling fresh for another week of drinking productivity. Come enjoy stand-up comedy with Poland’s best English-speaking comedians. And when we say the best, it’s not just the alcohol talking.

First up, writer and in-demand voice actor Derrek Carriveau brings his whisky-warm voice and his martini-dry wit to the stage. Derrek will aim his boozy humor at everyday life to create comedy that is both acerbic and wonderfully honest.

Next, Gaweł Feliga takes the stage. Gaweł has been performing across Poland for the past three years in both English and Polish (as part of Stand-up Polska). Inspired by early Richard Pryor and late Doug Stanhope (not dead, yet), he decided to start his career in the middle with a set on Comedy Central Polska, followed by a solid, pronounced lull. Gaweł’s comedy style can be described as Philosophical abstractions, acute observations… and dick jokes.

Finally, Christian Dumais – writer and creator of Twitter’s @DrunkHulk – takes the stage with his bizarre humor and proves why TIME named him “one of [their] favorite funnymen.” Thanks to his nearly 200,000 followers, Drunk Hulk is the fourth most popular Twitter feed in Poland. Come see why comedians like Russell Brand and writers like Neil Gaiman love Drunk Hulk.

And your host? The mastermind behind stand-up in English in Wrocław, Famous Jim Williams.

SO get out of the house, get down to Mleczarnia, and share some laughs with a bunch of foreigners and Polish people who came together to enjoy comedy in English!