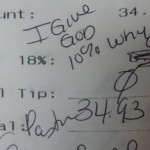 In case you haven’t heard, an Applebee’s waitress was fired after she posted a customer’s receipt online. The customer – a pastor – had written on the receipt: I give God 10%. Why do you get 18? The receipt had since gone viral and here we are.

While I think it’s awful that the waitress was fired, I’m most concerned about the 10% gratuity fee for God.

Is the 10% a footnote in the Bible? For species with a party of more than a billion, a 10% gratuity fee will be automatically charged. If so, that seems insultingly low for a person who not only created pancakes, but the atomic particles that allow pancakes to exist in the first place.

If I were God, I’d put it in the Bible that I deserve 70% of everything you earn.

Then again, a lot of people might move to Russia to avoid paying my 70% fee.

What does God do with the 10% he receives from this woman? Does he pay taxes on it? Does he save it for a rainy day? Does he spend it on lottery tickets? Does he swim in his money like Scrooge McDuck? Does he give 18% to waitresses with his own 10%? Or would he write on his receipt I get only 10%. Why do you get 18?

Then again, if God doesn’t exist, that means this woman has been giving 10% to an imaginary person while complaining about giving 18% to a person who not only exists, but provided a specific service for her.