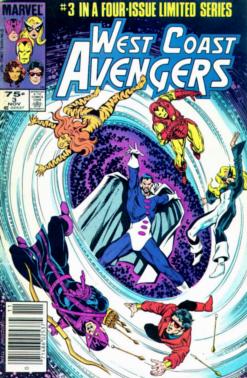 The West Coast Avengers get a little downtime after rescuing Los Angeles from a freak snowstorm. But before they can enjoy their BBQ, Wonder Man and Tigra help Shroud resolve a gang matter that brings them face to face with Graviton.

The cover’s not exactly accurate as only Tigra and Wonder Man (with the Shroud) have a tangle with Graviton, but that’s no big deal.

The first thing that surprises me about this issue is how continuity heavy it is, as the snowstorm at the beginning of the issue ties in with events happening in Thor at the time, Wonder Man’s exposition with Tigra brings up a lot of Avengers’ history, Jim Rhodes confession to Tigra is connected with events in Iron Man, and Graviton’s exposition brings up past Avengers and Thor stories, as well as Secret Wars. Not that it’s a problem, because the book does a great job in citing what issues to look up for the rest of the story, but I’d forgotten how these old comic books so willingly flaunted its own continuity.

That said, the introductory conflict (snowstorm) is a side effect of a story the book has nothing to do with and hadn’t been hinted at before, and it disappears as suddenly as it appears. Right now, if we looked at all the conflict’s the team has had, it would amount to a misunderstanding, a fight with a hack villain, and a snowstorm that has nothing to do with anything.

I’m really starting to wonder why I loved this team so much.

Once the snowstorm is over, Hawkeye decides to have the first annual Avengers BBQ. Everyone is pretty pumped up about this except Wonder Man, who is still bummed out about letting the Blank get away coupled with his issues about being resurrected from the dead. All this has him wondering if he’s really Avengers material. Luckily, Tigra is there to talk to him after Iron Man passes on the opportunity. And Tigra tells Wonder Man her own insecurities, all the while flaunting her half naked body in front of him, even going as far to show him her amulet that allows her to look like a normal woman.  It sounds terribly dirty, I know.

From there, it’s one coincidence after another which finally leads to Tigra, Wonder Man and Shroud confronting the Blank, and then finally Graviton. Graviton ends up double-crossing the Blank, as these villains do. And sends the Blank, Tigra and Shroud flying into the Pacific Ocean, leaving Wonder Man trapped under water in the pool. The issue ends with Graviton standing by the pool with two women in bathing suits as they watch Wonder Man drown. If you’re interested, one of the women looks frightened while the other looks fascinated.

The cliffhanger doesn’t really work, as we know Wonder Man is indestructible. So the possibility of Wonder Man drowning doesn’t seem to be that threatening.

A couple of other things: I love the fact that everyone is in costume at the BBQ, and how Rhodes, as Iron Man, is stressing out on how to eat without revealing his identity. Speaking of, he does reveal that he’s not Tony to Tigra, but does so by removing his glove. While I appreciate the whole “Obviously I’m not Tony because I’m black,” it would’ve made more sense just to take off the helmet and, you know, say, “I’m not Tony; actually, my name’s Jim.” Also, considering the amount of insecurity on display here, I’m not surprised the Avengers sent these guys out west.

Boast and Roast! The writing here is a little awkward, especially in the exposition dumps. While I know it was how these stories worked back in the day, it feels like tire screeching decades later. 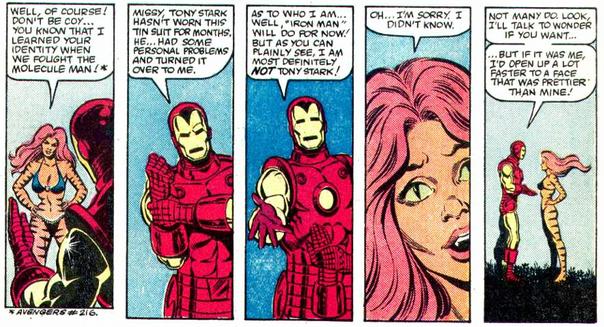