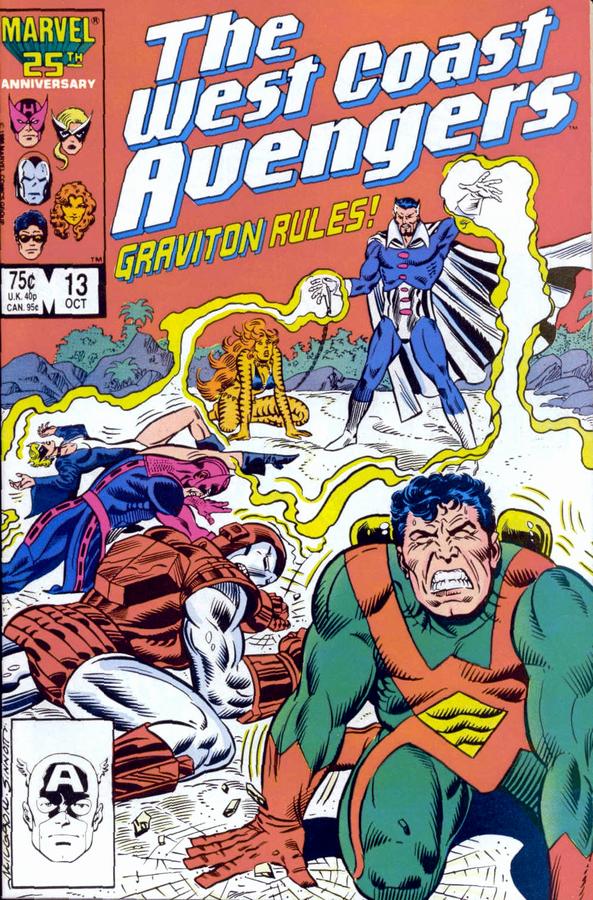 On a floating rock ten miles above Earth, the team is trapped by Graviton and his allies, Quantum and Halflife. It’s up to Tigra to save the day, but in order to do that, she’ll have to overcome her cat side and become ordinary Greer Nelson. Meanwhile, Hank Pym’s investigation into locating Master Pandemonium catches the attention of a demon.

There’s a lot of monologuing going on here. Graviton is getting his revenge from the last time the West Coast Avengers took him down. And because Englehart is writing, this means this is a wonderful opportunity to provide some flashbacks.

Why Graviton just doesn’t kill everyone is beyond me. He’s extremely powerful and even Wonder Man shouldn’t be a problem for him. But he keeps everyone alive, with Iron Man and Wonder Man stuck to the ground, and Hawkeye and Mockingbird in some kind of electric jail cell. He keeps Tigra on a leash, however. Graviton, who understands Tigra’s inability to control herself in catform, keeps Tigra close so he can make out with her in front of her friends (see below).

Graviton gets it wrong, of course! If I was Graviton, I would’ve made out with Hawkeye instead. You know, to show everyone who’s boss!

Tigra is conflicted, especially when her cat-self is attracted to Graviton’s power (“I could end up a goddess!”). So when the opportunity presents itself, she transforms to plain old Greer Nelson to keep things simple. But without her cat powers, she’s essentially a woman running around in a bikini on a rock ten miles above the Earth.

No matter. Luckily there’s a stupid guard she can knock out and steal his uniform. From there, through the magic of gossip, she manages to turn Quantum and Halflife against one another. They start fighting and all hell breaks loose, allowing the team to break free and save the day.

At the end, Greer tells the team that she’s going to remain human most of the time and turn into Tigra when she has to. And now that she knows how easy it is to lose herself, she’ll have to stay extra alert. Which is like saying, now that I know how easy it is to become addicted to this cocaine, I’ll have to be extra alert when I snort some more later.

The issue ends with Pym being stalked by a demon as he explains that the team is needed in Kansas City. Why? Well, for that answer, it looks like we’ll have to jump ship and check out Avengers Annual #15 next.

Boast.  Not bad, though the Tigra stuff is starting to get ridiculous. If Hawkeye was half the leader, he’d send her packing until she had her issues sorted out.

Legal nerd says, “I think you mean: slandered her!” 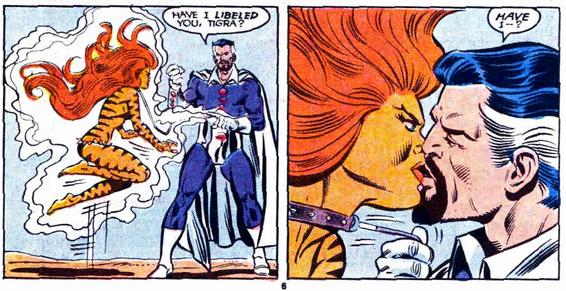