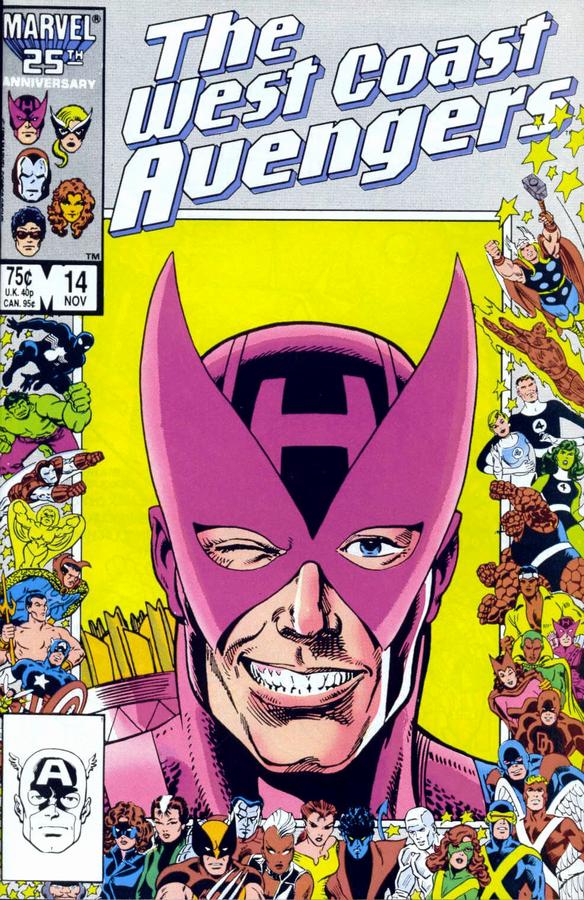 During a training exercise, Tigra’s cat-side gets the better of her and she almost kills Hawkeye. She transforms back to Greer Nelson with the intention of quitting the team. Hank Pym stops her and reminds her that this is a new beginning, an idea he knows a lot about. Nelson confesses her love for Pym, but before they can get cuddly, the demon that had been stalking Pym previously reappears with a lot more of her pals and whisks them away. The rest of team go to San Francisco to team up with Hellcat and Hellstorm, who help them to get to hell to save Pym and Nelson. Along the way, they inadvertently team up with Master Pandemonium and end up  stranded on a boat on the river of death.

I feel dumber for having written all that.

I remember this cover well from when I was a kid. All the Marvel covers at this time had a head shot to celebrate Marvel’s 25th anniversary. Not sure who did the cover for this issue, but Hawkeye looks pretty damn good.

The Master Pandemonium storyline officially makes no sense. Maybe there’s some logic going on here and I’m missing it, but it looks more and more like Englehart was enjoying grandma’s sipping sauce when he wrote this issue. For a storyline that’s been building for nearly a year at this point, this feels tiresome rather than epic and exciting.

The Tigra plot is another thread that’s way overdue for some closure. “I’m Tigra. I’m Greer Nelson. I’m Tigra but I can control it. I can’t control it. I’m Nelson again but I want to be Tigra.” Her uniform is also a major problem, because it barely works when she’s Tigra, but as Nelson, she’s simply Woman in Bikini.

Hellcat and Hellstorm are nice additions. Hellstorm does get to lecture readers Wonder Man about how there are many different Satans and devils in the Marvel universe, which doesn’t work the more you think about it. But then again, this is a world where Norse gods roam freely, so whatever.

Pym and Nelson getting trapped in hell is mildly interesting. My favorite part is when demons are about to kill both of them and Hank apologizes to Nelson, and she replies, “It’s all right…my life had become a living hell anyway!” Honestly, reading issues like this, I’m starting to feel the same way.

Roast.  The drama here falls flat, as Tigra’s problems feel like they’ve overstayed its welcome. This issue is trying too hard to be too many things, and it doesn’t help matters by not making any sense whatsoever.