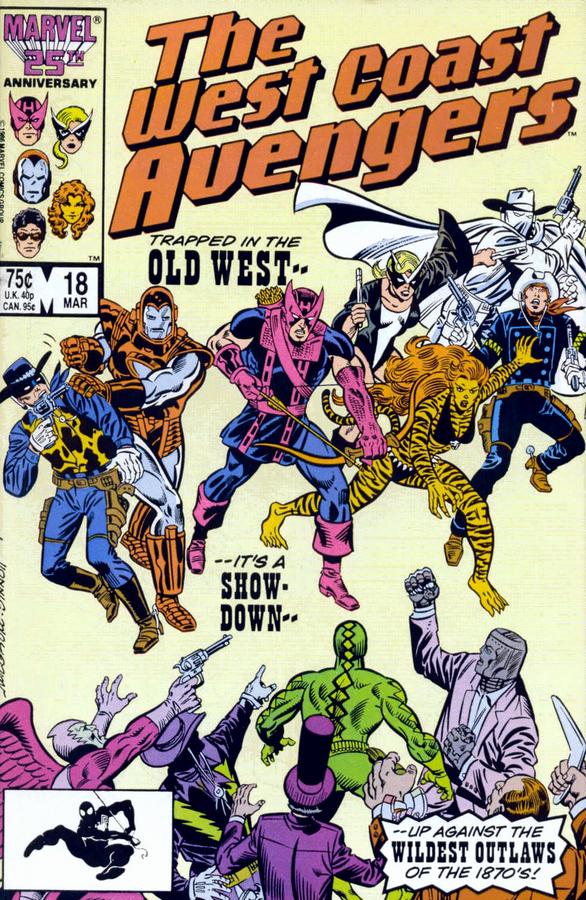 The team got Marty McFly’d by Dominus and are now trapped in the old West with a time machine that can only go backwards. Before they can get their bearings, the Rawhide Kid, the Two-Gun Kid and the Night Rider show up which leads to a giant team-up in order to take down some good old fashioned super-villain outlaws. When it’s all over, the team decide to go back further in time. And just as they’re leaving, the Night Rider goes nuts, knocks out Mockingbird and takes her away, trapping her in the 19th century. Meanwhile, in the 20th century, Firebird stops Hank Pym from killing himself.

The beginning of the West Coast Avengers “greatest adventure” kicks into gear, but if you’re a new reader picking this up, you might be scratching your head. Or maybe not, considering that there’s an editor’s note on every third panel telling you what issues you can read to catch up. As always, the book is continuity heavy to the point of distraction, with enough flashbacks (I mean, there are even flashbacks to the previous issue) and call-backs to make this feel like an episode of the Golden Girls where they’re sitting around and reflecting.

Mockingbird freaking out about being trapped in the past is unnecessary and continues the trend of her role being more Wife than Hero. Iron Man and Wonder Man are suddenly trying to one up one another, which is something I think they’d be avoiding considering their situation. The only one who comes out looking good is Tigra, which considering the last dozen issues is a shock.

Firebird, who is now La Espirita, gives Pym a giant pep talk to convince him to not shoot himself. In the process, she also convinces him to be the best hero he can possibly be, one that is true to his nature (as he’s tried the hero thing four times now). This is setting the seeds – finally! – for Pym’s return to the team after a year and a half of him playing a version of the Jarvis role, except this version liked sitting alone in the dark listening to his Air Supply records.

The fun part is seeing the team split into three groups, with members scattered across different centuries. What’s the deal with the Night Rider thinking Mockingbird is a goddess and kidnapping her? Is going back further in time the best way to get back to the future?

Boast. My instinct is to want to hate this issue, but I had a good time. Though it’s continuity heavy, it is a time travel story after all.

Here, honey, let me calm you down with some needless exposition…