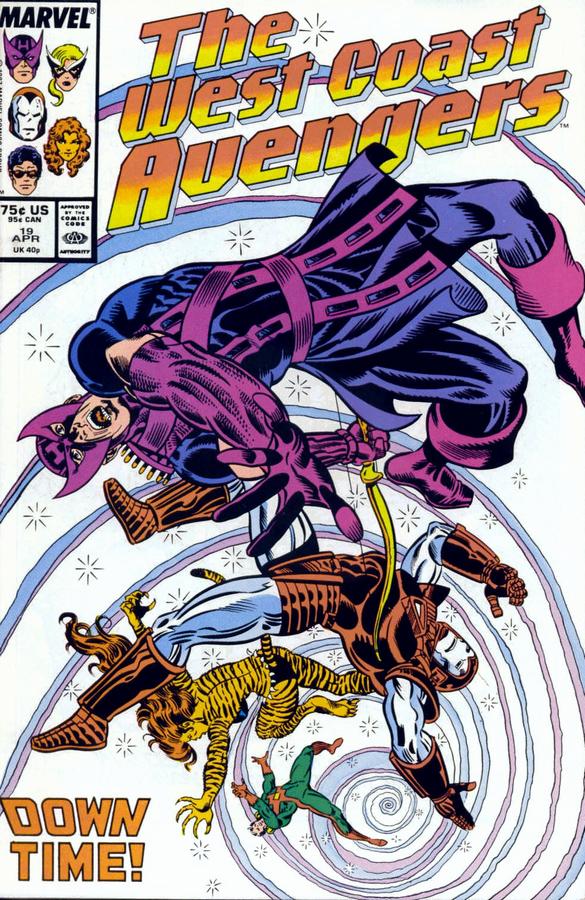 In the 18th century, Hawkeye, Tigra, Wonder Man and Iron Man meet Carlotta Valdez, a woman Firebird had a vision about way back in issue 6. Plus, Wonder Man’s overconfidence puts Hawkeye in danger. In the 19th century, the Rawhide Kid and the Two-Gun Kid try to rescue Mockingbird from the Night Rider. And in the 20th century, Hank Pym continues his therapy session with Firebird.

Part 3 of the West Coast Avengers “greatest adventure” is here. And while the cover’s double pun implies this might be a slow issue, it’s actually pulling together story threads that readers probably didn’t even know were there. While I often give Englehart a lot of grief about his writing, this issue is revealing a certain level of brilliance that can’t be ignored. It’s a shame it’s taken so long to get here.

18th century: Hawkeye is devastated that his wife is trapped a hundred years ahead of him. His reasoning is a little dubious, as he feels he’s taken away so much of her independence that she no longer knows how to work alone. Nice one, Clint. Wonder Man and Iron Man are at each other’s throats, and it all comes to a head when they’re attacked by some Spanish soldiers and Wonder Man’s actions causes Hawkeye to be badly burned by a gunpowder blast. Once they find shelter in a nearby cave, they’re found by Carlotta Valdez, which leads to the usual “should we tell them about the future to avoid a horrible tragedy” conversation that every good time travel story needs.

Hawkeye comes up with a plan to give Valdez a note that she’ll pass on to generations in hope that Firebird will eventually get the message.

19th century: The Night Rider has drugged Mockingbird to convince her to love him, as he thinks she’s a goddess; one that belongs to “the son of the spirits”. It doesn’t make any sense even within the confines of the logic presented here, but we’re supposed to go with it for the benefit of the story. The issues mandatory fight scene is between the Night Rider and the Rawhide Kid and the Two-Gun Kid, and eventually Mockingbird joins in to protect her new man. Also of interest, most of this story takes place in the same cave Hawkeye and the gang are staying in, and Mockingbird comes across one of her husband’s arrowheads.

20th century: Firebird continues to help Pym by discussing his Pym particles. And while that sounds dirtier than I intended, sadly, it’s not terribly exciting, and it feels like wheel spinning. We do learn that Hawkeye’s message is in Firebird’s family Bible. And this means Firebird – like most Christians on television – has never actually read the book since she’s never seen the message. Nice one, Firebird.

Boast. Really not bad. I wonder how far ahead Englehart planned his storylines because seeds he planted 13 months before are starting to bloom. He’s either some kind of mad genius or one lucky writer. Still though, there’s something to be said about a team book that’s more interesting when the team is separated… 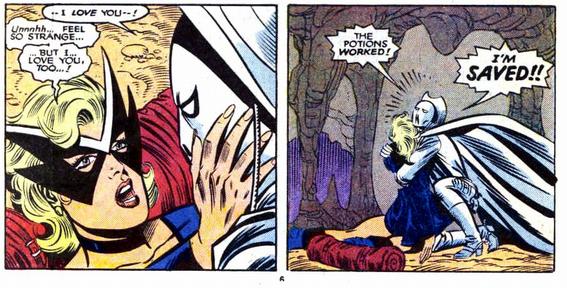