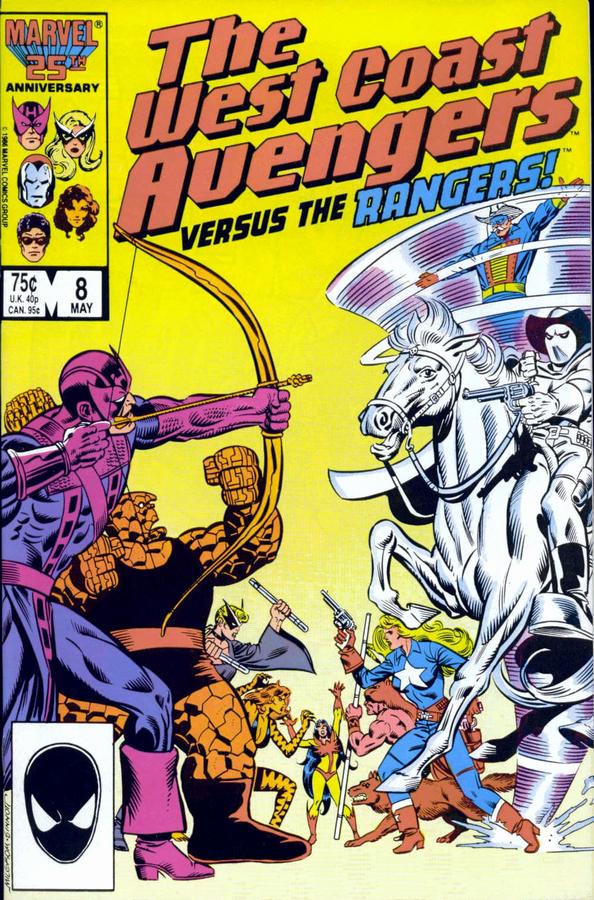 The team returns from their visit to Cat Land. Wonder Man brings them up to speed about his victory over Ultron. Mockingbird and Hawkeye fight it out, as married couples do with weapons, because she doesn’t like the way he’s ignoring Firestar. Speaking of Firestar, she calls upon her old team, the Rangers, to visit the compound. But things are not what they seem, as they have been possessed by one of Master Pandemonium’s demons.

Firebird is proving to be more annoying than anything else. I appreciate the attempt at a Hispanic superhero – especially for 1986 – but between her visions and her praying, she’s a character that’s too reactionary to do much with.

The team seem pretty torn up about Pym’s mourning of Ultron Mark 12. And Iron Man, who is only shown from afar, is the one to console Pym in his time of need. If previous issues are any indication, Tony is probably mentioning how he hooked up with Pym’s ex-wife. Still though, it would’ve been nice to have at least one member of the team scratching their head at the idea of Pym upset over the loss of a robotic son.

It’s interesting that Mockingbird and Hawkeye simply can’t have a discussion about their problems. In this case, Mockingbird is annoyed that he ignores Firebird’s efforts to join the team and focuses only on the Thing. This is perfectly reasonable. However, like most disagreements in the Marvel universe, they resort to physical fighting. It’s also interesting that Mockingbird lunges for Hawkeye, he throws her off with his feet, and then they’re both immediately going for their weapons, with Hawkeye SHOOTING AN ARROW AT HER! He manages to shoot two arrows at her before she KNEECAPS HIM WITH HER BATONS! He fires off one more, tackles her, and they start making out.

There’s probably a lot of metaphorical sexual stuff going on, but really, do we need to go into this here?

All right, but it’s important to establish the – WAIT A MINUTE! I’M NOT FALLING FOR THIS ONE AGAIN!

The issue’s big fight is between the West Coast Avengers and the Rangers. Luckily, there’s no misunderstanding going on here, but rather, the Rangers are possessed. The demon is connected to Master Pandemonium, so this side story with Firebird actually connects with the larger story and puts Tigra closer to making her decision on whether to kill Master P or not. I’ll give Englehart credit for keeping all the plates spinning even when it doesn’t look like he’s spinning.

Boast. Yeah, I’m on board with this. This book is cooking with gas now.

All the Thing ever wanted was for a female teammate to give him a massage. That’s not creepy at all… 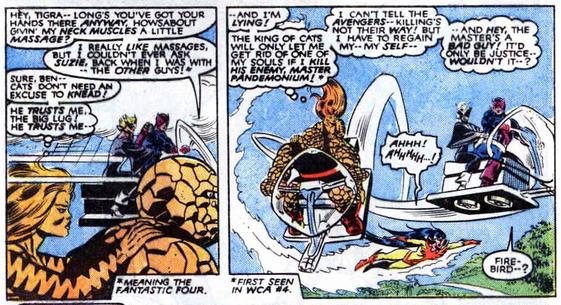